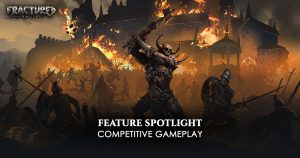 Now that we’ve taken a look at what it’s like living in the world of Fractured Online, exploring player cities and the Knowledge System, let’s dive into what it’s like interacting with others and the environment… and by interacting, we of course mean everything from peaceful, cooperative gameplay to downright aggressive and cutthroat competition.

Both PVE and PVP have their place in Fractured Online, with each race and planet emphasizing different aspects. This not only allows you to find the gameplay style you find most enjoyable, it also provides you with limitless combinations, many of which you can adjust on a sliding scale.

While it might be tempting to label races and planets as “the PVE planet” or “the evil race”, we wanted to create a PVP and PVE system that reflects how truly unique and complex a MMORPG sandbox world can be – and that’s anything but simply black and white. So, let’s take a look at a few of the shades of gray in between!

In Fractured Online, each character is always categorized as Good, Neutral, or Evil. These three titles, built on the classic D&D moral spectrum, are collectively known as Alignment. If you’ve been following our past spotlights, then you know this is going to play out in your overall gaming experience. 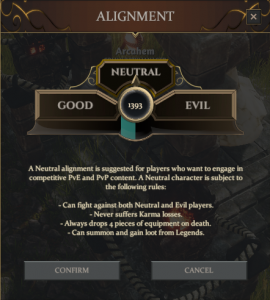 Just as characters can change by gaining experience and developing their skills and talents, they can also change in terms of their Alignment. This simply means your character is not set in stone. The options you have to choose from, however, may be restricted by your choice of race and location, as well as your karma.

Karma is the indication of where your character stands between good and evil. It ranges from -10,000 (Diabolic) and +10,000 (Holy), and changes according to your behavior in game – how you interact with other players and the environment, which gods you worship, and more. When your karma is below zero, you are restricted to the Evil alignment. Otherwise, all the three options are open to you.

WHO YOU ARE MATTERS

Each race has its own unique relationship to Alignment.

So, what sets the Alignments apart from each other?

When flagged as Good, you’re not allowed to perform any hostile action against other players flagged as Good or Neutral. This means no basic attacks or targeted spells against Good and Neutral players, neither looting them nor giving them a fatal blow. However, such actions can be performed against Evil aligned players, and will even earn you Karma points!

Neutral flagged players are allowed to perform hostile actions against Evil players, just like Good players can, but also against fellow Neutrals, without losing Karma. This makes it the perfect alignment for those of you who are looking for a chance to PvP against like-minded players. Considering the Neutral alignment is also required to engage in end-game PvE events on Syndesia such as Legend summoning, we expect most competitive guilds will choose to be Neutral.

As for the Evil alignment, there are a few reasons why you could be on this path in Fractured Online. Maybe you’re a Demon, or you “just” wanted to engage in criminal activities such as stealing or murdering and looting innocent players. No matter what got you there, when aligned as Evil, you’re in a high-risk situation, since anyone can hunt you down and you may even end up in jail, as explained further below.

Luckily for you though, it’s not enough to get you cast out of society. You can still enter settlements and even gain the attention of some not-so-kosher NPCs.

So how do you change your karma? By choosing the right (or wrong) actions! 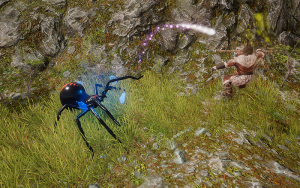 Moreover, the gods you choose to worship can also affect your Karma, as once a day at a temple of your choice you can make a Shrine Offering – a donation of hard-earned gold.

These shrine offerings are an effective – albeit expensive – way to change your Karma towards that of the god you’re donating to. Offerings given to Elysium, Tyros and Nelena have a positive effect on your Karma, while money pledged to the dreadful Babilis cause a heavy Karma loss. Donations to Neutral Gods such as Iridia and Galvanos instead have no impact on your moral stance.

Other than (possibly) changing your Karma, a Temple Offering increases the favor of the God towards you. If high enough, you might even get bestowed a Divine Blessing, or assigned a Divine Quest to carry out!

WHERE YOU ARE MATTERS

Now you know what it means to choose an Alignment, how your race and your Karma restrict your possibilities, and what the consequences of each choice are. It’s time to have a look at the three planets to see how each Alignment functions there!

The lush forests and crystal-clear lakes aren’t the only reason to visit Arboreus. The primal crystals that can only be found there are a valuable resource for all races, and there are plenty of unique abilities to be collected.

Home to the peaceful Wildfolk, this planet is void of non-consensual PVP, thus free from killing sprees and general hostility.

Humans with Good or Neutral alignment are allowed to walk the lands of Arboreus for as long as they like, thus being able to explore a good portion of the world at once, collecting resources and acquiring knowledge.

If instead you’re aligned as Evil and manage to make it to Arboreus, you’re in for some trouble. Elysium’s primal energy will start repelling you at once, draining you of all the vital energy you have, meaning you can stay on the planet for a limited time only.

While Syndesia may not be flowing with primal energy, it still exists as a planet where all characters can travel to, which has ultimately turned it into the economic center of the Elysium System.

Where you spend time on this planet is going to determine the sorts of interactions you can expect. Player towns are safe from PvP, but protection can only be offered outside city walls by sovereign guilds and alliances. Since this makes room for criminals, a special Bounty Hunting system has been put in place to handle them.

Governors can choose to erect a jail in their town. Players with high enough Karma can earn the title of Bounty Hunter by taking up a contract with the jail, which also locks them into Good alignment until the contract ends.

When knocking down evil players, Bounty Hunters have the option of imprisoning them. When imprisoned, the criminal character serves jail time and leaves their equipment and items behind. Jail time can be served or cut short by paying gold. Should a character lack enough gold to be released on bail, a friend can also pay the fine and demand their release. The bail money is then split between the Bounty Hunter and the city.

Wildfolk on Syndesia aren’t privy to the power they harness on their home planet. Though they can visit as long as they like, they will need to seek shelter in towns willing to allow them in.

Syndesia doesn’t outright reject Demons, but they do begin leaking vital energy when too many hours are spent away from Babilis. Should they be on Syndesia during an eclipse, then their powers and energy remain as long as Tartaros is casting its evil influence on the Human world.

It’s all fun and flames on Babilis’ playground. These hellishly hot wastelands are paradise for all hardcore MMO players who want to enjoy competition at its finest.

PvP on Tartaros is strictly Free-For-All, aside from the Nests where new Demons are born, and no punishment or limitation is imposed on Evil characters. A visit to this planet should be well planned!

PVP AND PLAY YOUR WAY 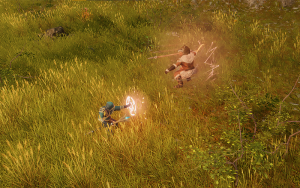 As you have read, the PVE and PVP systems in Fractured Online haven’t been developed to give you a generic, cookie cutter experience, but rather to provide you with a palette of options that allow you to navigate environments and interactions based on the gameplay you currently desire. As your desires change, so can your gameplay.

Fractured Online is about giving you a truly free MMORPG experience and PvP is a part of that. That’s why we’re giving you the freedom to play PvP your way.

Until next time,
Your Fractured Online Team

Join Our Fractured Online Discord Server!
Follow Us On Social Media Not To Miss Any News!

The Guardians of Nature Awaken!

The Guardians of Nature are awakening! Transform into your true, powerful form and much more in today’s update!