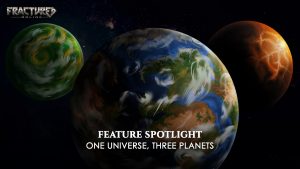 Join us in this sneak peek at the Fractured Online universe and what it feels like to travel within and between its worlds.

In the first part of this spotlight, we’re going to describe the universe of Fractured Online in more detail – how it came to be, what it looks like today, and what the characteristics of its three planets Arboreus, Syndesia and Tartaros are.

In the second part we’ll discuss the idea of “travel” in Fractured Online and drop some hints regarding the survival elements that exist in the game.

After the Fracture, the One Planet, Elysium, was split into three worlds: Arboreus, Syndesia and Tartaros. Put into motion by the same magic that created them, they started revolving around the sun, giving birth to the proper solar system known as the Elysium System.

As one might expect, the amount of magical energy required to perform the Fracture was beyond imagination and impossible to harness faultlessly, not even by sorcerers endowed with quasi-divine powers. As Elysium was torn apart, countless fragments of its own mass were scattered around the universe – some as small as a little hill, others as large as a whole region of the planets to be. Over time, pulled by the gravity of the sun, they started aggregating in the space between the orbit of Arboreus and that of Syndesia and Tartaros – and so the Elysium Ring was formed.

The decision to create a proper solar system gives us not only a perfect environment to develop three different gaming experiences, but it also opens up a myriad of possibilities to introduce challenging game mechanics such as seasonal cycles and events related to the position of planets and the exploration of asteroids. The latter is quite of a big chapter in itself and will have a whole feature spotlight dedicated to it.

When it comes to the time cycles of the three planets, their behavior is quite similar – 1 day (a full rotation of the planet around its axis) lasts roughly as long on Arboreus as it does on Syndesia and Tartaros, and so does 1 year (a full rotation of the planet around the sun). Below you can find a table showing the duration of different time cycles in Fractured Online compared to real world times.

Day/night cycles behave realistically on each world, with half of the surface of a planet being in day time and the other in night time, sunrise and sunset moving smoothly along the surface. Seasons act in a similar way, being opposite in the two hemispheres, but less noticeable at the equator, where temperatures are more or less constant.

Syndesia, the cradle of human civilization, is a medium sized planet, boasting the largest environmental variety of the whole Elysium Ring. While the lack of Elysium’s primal energy makes its vegetation not as lush as that of Arboreus, it is still a fertile and resource-rich world, providing favorable conditions for the development of the human race and its ambitions.

On Syndesia, humans are always busy harvesting wood and stone to build their homes and castles, and mining different metals to craft their mighty weapons and armors. Coal and oil are also common, and much cherished by humans as fuel for their industries and their technological devices – a kind of knowledge rejected by Wildfolk and Demons alike. On top of that, cultivations and pastures are widespread, leading to a level of environmental exploitation which sadly knows no match as well.

As always in the universe of Fractured Online, such an abundance of resources is not equally spread throughout the planet. Some regions are overall richer, others poorer, and even in the ones most sought-after some resources are hard to come by, which stimulates inter-planetary commerce to a great deal.

After the Fracture, two of the Six Gods decided to watch over Syndesia: Iridia, goddess of fortune and mother of all humans, and Galvanos, god of knowledge and keeper of the nine paths of magic, who always showed a great appreciation for the human persistence and fascination with progress.

Arboreus is the largest planet of the Elysium Ring, with a surface twice as wide as that of Syndesia – although the area of continents above sea level is roughly equivalent to that of the other planets. Other than being the largest, it also lies furthest from the sun, travelling the same orbit that once belonged to Elysium. Notwithstanding its distance from the star, the damp atmosphere of Arboreus allows it to be a warm and verdant world, covered with dense forests and plains of lush green grass, crossed by rivers and lakes aplenty.

Compared to Syndesia and Tartaros, Arboreus is the planet that most resembles its father Elysium, especially given it’s the only one that still retains Elysium’s primal energy, which manifests itself into ever-growing deposits of magical crystals, coveted by all the creatures of the System.

Crystals aren’t the only resource on Arboreus that stirs the greed of the people who don’t inhabit it, however. The planet is rich in wood, stone and minerals, although Wildfolk usually don’t take an interest in mining and blacksmithing. Indeed, the homes of Wildfolk are mostly made of wood, while stone is usually kept to erect public buildings.

After the Fracture, Arboreus was put under the protection of three of the Six Gods: Elysium, which is thought to be the source of Arboreus’ primal energy; Tyros, god of light and justice; Nelena, goddess of the wild and mother of all beastmen.

Tartaros is the smallest of all the planets of the Elysium Ring. Notwithstanding its size, its walkable surface is similar in area to the one of Arboreus and Syndesia since it is mostly covered by land. It’s a hot, arid world, plagued by constant volcanic activity and scarce in edible resources.

Stone is common on Tartaros – sandstone, granite and obsidian in particular – and frequently used by demons to erect the buildings of their unholy cities. Metals besides iron are rare, but weapons made of the latter have already taken the life of thousands of creatures, in Tartaros and outside.

Due to the lack of water, agriculture is practically unfeasible on Tartaros, which forces demons to get most of their food by hunting the fearsome creatures that inhabit the planet. Whether demons would be interested in agriculture is doubtful anyway, considering patience is not exactly a virtue of theirs – if they have any virtue, that is.

Demons usually wear clothes made of leather crafted from the skin of their prey, since wild plants are also rare to come by – and when they can be found, they’re only suitable to be harvested for wood or hard fibers to make strings and ropes.

After the Fracture, Tartaros became the prison of the dreaded Babilis, left to be the only god watching over the planet and its demonic progeny.

Of course, such a unique type of progression – all part of the Knowledge System – requires travelling to be more than what you’re used to in other MMORPGs – which typically boils down to walking or riding from point A to point B (without getting murdered on the way if the game features Open PvP).

Indeed, in Fractured Online survival mechanics come into play to spice things up, requiring a deal of preparation the longer your travel takes and the more extreme the environment is. Let’s have a look at them following the (mis)adventures of a player whom for the sake of simplicity we’ll call… “you”.

As you can see, there are many ways to die in Fractured Online – and even more to counter it in your very own style!

If you engage in the merchant profession, things get even more complex. In Fractured Online, there is no magical “stash” that makes your items easily available everywhere you go. You can earn some bank space to store your items in a village, but such space is not free – and even if you unlock it, what you deposit in the bank stays in the bank.

As your character inventory in Fractured Online is quite limited, you’ll need wagons to move resources – which ideally means animals to drag them, and a proper escort to see that your bounty doesn’t fall into unwanted hands.

Since the Fracture, the fates of humans and demons have been inextricably tied to those of Syndesia and Tartaros. As punishment for having plunged Elysium into chaos, the two new planets have been designed to orbit each other around a common barycenter, giving birth to what in astronomy is known as a binary system. This peculiar structure leads the two planets to regularly obscure each other through long eclipses, which have a deep impact on the lives of demons and humans alike.

Not much is to be said regarding the eclipse of Tartaros – the time when the planet is shadowed by Syndesia. The latter possesses no aura, being neither good nor evil as the human race that inhabits it, therefore casting no influence on Tartaros during an eclipse.

Entirely different is the fate of Syndesia when the planet is obscured by Tartaros. The event, which lasts for several real-time hours, sees the human world plagued by the demonic aura of Tartaros and the desire of Babilis and its progeny to taste human blood. Thanks to the aura, demons do not suffer the usual penalties when walking the grounds of Syndesia, retaining all the powers they have on Tartaros, and being able to haunt humans until the eclipse is over.

During the unnatural dark times, several Stargates are spawned on the two planets, allowing demons to effortlessly invade Syndesia. Such portals can be closed, but it’s an incredibly strenuous task for even the largest human armies, since the locations are infested not only by demon players, but also by AI-controlled demonic spawns.

More often than not, the only chance of humans during an eclipse is to lock themselves up in their towns and villages and try to hold off the invaders, praying for the Long Night to be over soon.

An MMORPG without fast travel allows for exciting open world adventures and guarantees true profits for merchants, as we discussed above. On the other hand, having to walk or ride long distances just to meet up with your friends or reach your favorite point of interest can become unbearably cumbersome in the long run, disregarding how exciting the travel is.

Is it possible to get over this ostensible dichotomy? We think it is! Here are the two main fast travel options currently available on Fractured Online.

Join Our Fractured Online Discord Server!
Follow Us On Social Media Not To Miss Any News!